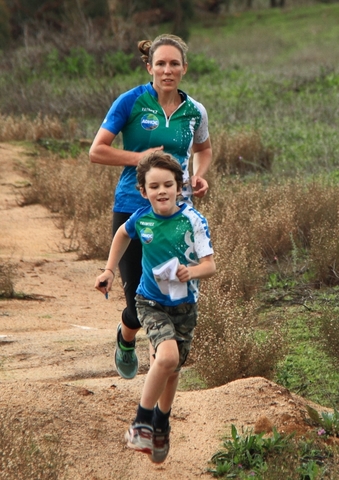 Well done to the over 100 souls who braved the squalls and made it out to Christmas Creek, including 93 registered entries, as well as several chaperones and a few groups. It had rained early that day, drenching Anthea and I during final setup, but as the crowds arrived the rain departed. The sun never quite managed to completely peep out from behind the clouds but it was like a dewy English morning in the rolling green hills; Christmas Creek quietly bubbling away in the valley.

The course stats were greeted with a few groans from some (maybe they forgot to bring their crampons) but otherwise everyone was in fine spirits. A little windy at the start at the top of the hill, but otherwise beautiful running conditions for everyone as they set off. Apart from some pretty wet bushes the first half of the field managed to keep the wet at bay, finishing before the weather turned. Then the weather turned. The later runners were drenched in a terrible squall; some looking like they had swum to the finish. But they were all still smiling (most probably because they had finished).

From the debriefs afterwards I think a few people were caught out by the larger scale of 1:5000; normal for a sprint, but unusual for a bush event, with quite a few people overshooting their controls, some considerably! I’m not sure how to explain some of the other routes that were described to me; maybe they were enjoying the beautiful scenery?

Despite lots of slippery rocks and a few hidden broken fences the only person silly enough to injure themselves was me; slipping on wet rocks in the creek whilst setting a couple of weeks ago (and in another squall).

Sincere thanks to all the following people, without whom we couldn’t have run the event: