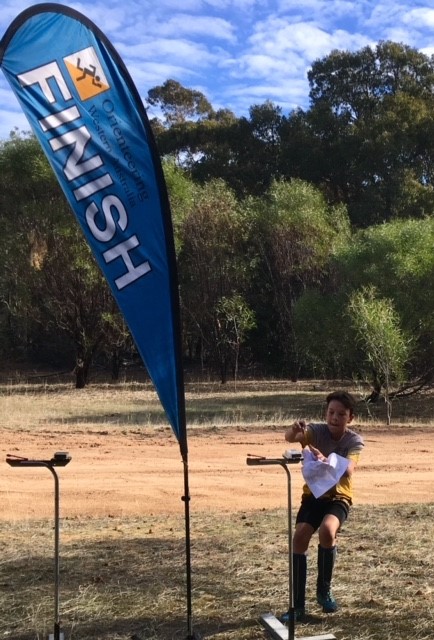 Over 110 orienteers took advantage of the long weekend to participate in the WA Classic. Both days of the event were on the aptly named Frazzle map that includes areas of open farmland for fast running and also areas of bush so thick that orienteers passing through these areas channelled Frodo Baggins entangled in the spider webs in Shelob's lair.

There were many happy campers on Sunday night enjoying the clear skies, the warm fire and the marshmallows! On Monday, after competing in the orienteering, the young and young at heart gleefully took part in Miss McCauley's colouring competition in the hope of an awesome prize. At the end of the weekend all participants agreed that the 2018 WA Classic was a memorable event.

The WA Classic combined 2 Day victors took home a custom orienteering book mark, featuring a map of course, and chocolate - which may not have survived the trip home for some!

The event was made possible by the hard work and expertise of Setters - Helen Post and Carol Brownlie, Controllers Ken Post and Ken Brownlie and Organiser Rosalie McCauley. McTeam (Cameron Duncan and Melinda Richards) handled the 'computer' and Shaun and Sarah Richards, Dan Greig and Anne Austin were helpful and informative Instructors.

Many people helped collect controls - Anne and Brian Austin, Jenny and Peter Komyshan, Daisy, Rosalie and David McCauley, Helen and Ken Post, Dan Greig, Tom Brownlie, Shaun and Sarah Richards and Pat Walsh. Last but not least, an extra special thanks you to Andrea and Penny and Phil Dufty and Riley McFarlane who helped out by dismantling the toilets.