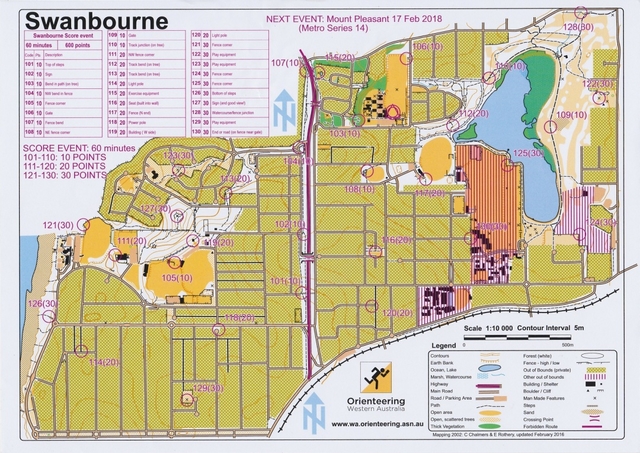 he last Metro score event for the series saw a strong turn out with a crowd of around 100 people enjoying the slight(!) hills, the cooling sea breeze and comparing route choices at the challenging Swanbourne score event.

From locals giving orienteering a go to international visitors on foot or on bike there was something for everyone. BO and LOST also had their AGM’s pre and post event, while a survey was conducted to gain some feedback on score events, yesterday’s attendees were certainly in favour of them!

Thanks to; Noel Schoknecht for setting a very interesting and challenging course, Richard Matthews, Nicole Davis and Jennifer Binns for set up and packing up; control collection by Ann Napier, Rosemary Kullmann, Tony Simpkins, Moreen and Alan Cox plus Noel and his trusty scooter. A big thank you to Nicole Davis for running the registration and results software computer while Jack Dowling processed and published the results. Many thanks to everyone who helps makes these events possible.

Congratulations to Sten who managed to do the event twice, once on his own winning the course with 580 points and then went out again shadowing his son Ruben and picked up another 205 points. Bjarne Friedrichs visiting from Germany went out on his bike and cleared the course, for 600 points, with just under 10 minutes to spare.

See everyone next week at Mt Pleasant. With just 2 events left in which to gain valuable points for the Metro Series points table it's time to make each event count!