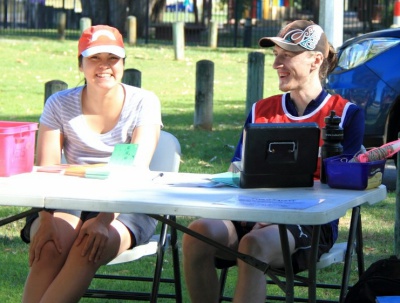 Despite the rumour that the setter was using Google street view in place of a site visit Cameron Duncan did, actually, visit Lake Joondalup before the event rather than use technology!

And it was a worthwhile planning and checking trip as he did a great job setting with lots of controls close to the start sending a big group of Orienteers in all directions at Wanneroo Lakeside.

Sten Claessens, on the long course tried to beat the bike riders home and only missed out by 20 seconds! The bike riders may have other problems to deal with soon as Rohan, just 5 and riding strongly on the short course with Mum, has a new bike and is keen to improve his skills. The biker boys need to keep an eye out over their shoulder.

Thanks to those who made this event possible. Jane assisted the setter Cameron Duncan on registration and event set up and tear down, along with Alec Duncan and Heike Behrbohm. Control collectors were Dave Pass, Wendy Hobley, Alec Duncan, Heike Behrbohm, John and Jennifer Major, and Oliver Nokes.

See everyone next week on the Shelly Foreshore. Don’t forget that there are just 4 events left in which to gain valuable points for the Metro Series points table.