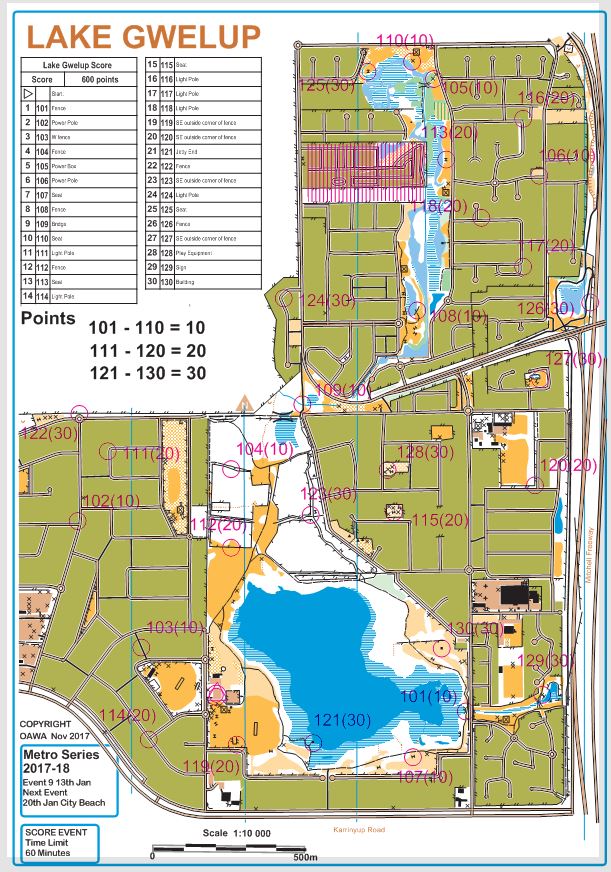 Timing is everything when juggling collecting the most number of points in a fixed amount of time. Score Events add an extra degree of difficulty on a metro map, with the goal to score the most points in a fixed time. Being late back, in this case over the hour, loses you 10 of those hard-earned points for each minute you are late.

At the Gwelup Score event, Oliver Martin had the highest score of those not on the bike, with 530 points in a time of 59:59 using all but one second of his allotted time. Others went at a more sedate pace enjoying the loop around the lake while Ben Coetzer cleared the course on his bike.

Thanks to those who made this event possible; Richard Matthews was the setter, registration and timing was run by Nicole Davis, while Moreen and Alan Cox were on meet and greet duties and helped pack everything away. Control collectors were Noel Schoknecht, Edward Plummer, Rosemary Kullmann and Ben Coetzer.

A few photos from the day are on the Orienteering WA Facebook page courtesy of Rob West. However, he was busy competing and other regular photographers were running computers and handing out maps you may need to wait till the next event to see yourself!