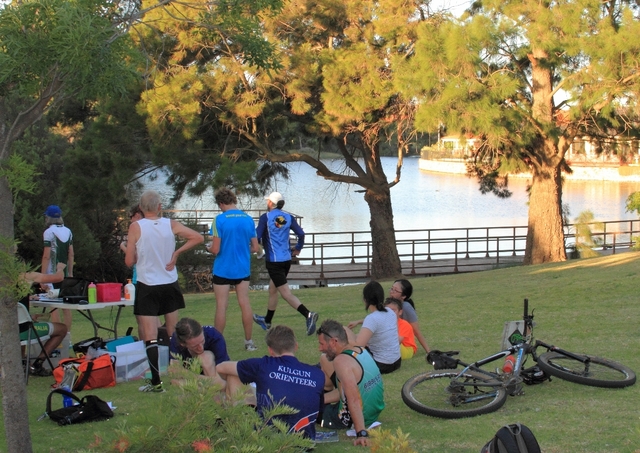 For this event orienteers ventured north to the modern suburb of Ellenbrook. Like many newer areas around Perth it’s designed with lots of loops, walkways, lanes, cul-de-sacs, parklands and water features, all providing some challenges for the competitors. The event centre was in the grounds of the Woodlake Village Community Centre overlooking a scenic lake well-populated with ducks and other waterbirds. The hot weather probably accounted for the lower than usual number of participants (49 entries including 4 on bikes), but those who did venture here made the most of the experience.

This time round we had a score event with 30 controls in groups of 10 and controls in each group having a points value (10 or 20 or 30). There were also penalties for late finishers. The resulting scores varied widely from 624 for Ricky Thackray, who cleared the course on his bike in just over 35 minutes to zero for one of our members who was rather late returning. The three foot classes all had close finishes at the top of the league table. After the event orienteers cooled off by lounging on the lawns admiring the lake view.

Thanks go to setters Joanna and Coreen Maynard and Alexandra Enlund, control collectors Sue and Jack Dowling, Rob and Lois West, Simon Windsor , Russell Buchanan and Phil and Penny Dufty, and Ricky Thackray for setting up the computer and assisting with results processing.