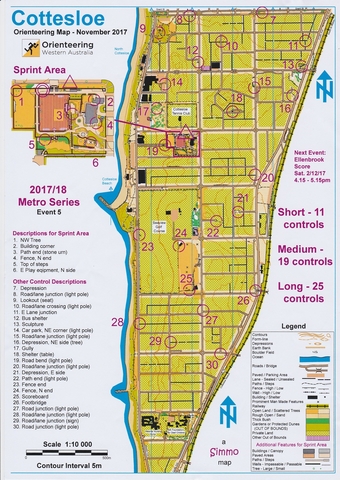 A hive of activity at Cottesloe as Orienteers weaved their way around wedding guests, ballet concerts and beach goers. A separate foot and bike course this week with a bonus “sprint pop-up” that highlighted the complexity of the beautiful Cottesloe Civic Centre grounds.With the sea breeze it was a great afternoon for a Metro event.

The Civic Centre had a small section of the map enlarged to sprint standard, with 5 controls available (it had been 6, but the afore mentioned ballet recital made one inaccessible unless you were a 5-year-old ballerina). Hence the courses were a little longer (about 400-500m) than originally planned. Setter Tony Simpkins commented, “In retrospect, after control 2 was deleted, I should have reduced the number of controls required for each course by one control.”

While collecting number 19 may have seemed tricky, at the end of the dead-end and outside the walls of the Civic Centre, it wasn’t all bad. As long as you did it in sequence between 17 and 23, it makes a link between the northern and southern controls on the western side of the map as part of a larger loop without adding too much distance.

On the short course you needed 11 controls, on the medium 19 and on the long course 25. For the bikes this week saw a separate map with the control in the Civic Centre and sand dunes not in a ridable zone. So, the bikes set off to collect all 23 controls on their map.