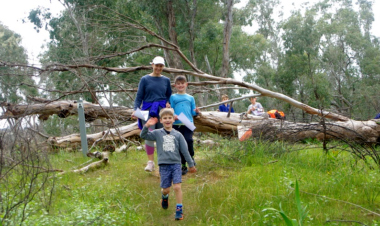 No jumbucks were spotted, but we did see kangaroos, emus, echidnas, goats and trail runners. Those orienteers carefully guiding their feet over the rocky ground may have spotted some blue leschenaultias and fringed lilies. The ridge also provided expansive views up the lower Avon Valley
and across the coastal plain and encroaching suburbia.

Over 80 competitors made it out to Jumbuck Hill on Sunday, and all were well and truly warmed up by the time they reached the start triangle. Jumbuck Hill presented a physically and technically challenging location. There was some fast open running on the top of the ridge, but the often-steep mid slopes were frequently rocky underfoot, which made for some difficult running. Some quite complex rocky areas on the map were not made any easier by the many grasstrees which impacted visibility.

The courses proved more challenging than we had intended. Many committed orienteers spent a long time out on their courses, and unfortunately quite a few starters did not make it to all their controls. We hope everyone still enjoyed the day out in the bush.

A great many people are owed our thanks. Firstly, thanks to setters Sten Claessens and Tim Sharp. Brian Austin acted as course controller and also helped to set out controls. Jenny and John Major acted as event organisers, kindly set out controls, and also looked after the E & VE start and newcomers. Graham Braid towed the caravan, and Melinda took care of IT during the event. Thank you also to Graham, Kate, Rohan, Ruben, Vanessa, Robert, Russell, Brad, John, Jenny, Joseph, Susan and Matt for collecting controls and helping to pack up.