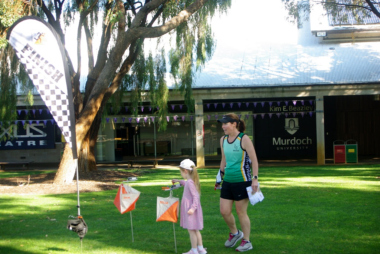 In spite of the University authorities’ stringent requirements and exclusion of a large part of the previous map, suitable terrain remained for adequate courses, set by Ken Brownlie under assiduous control by Anthea Feaver.

Nearly 125 people took part including 16 who ran more than one course; a couple of enthusiastic youngsters, and elders, doing all four.

Although barrier tape was used to deter some illegal short cuts, sadly at least one person was seen crossing forbidden garden beds, in spite of written and oral warnings to avoid those. Such behaviour could compromise our return to a venue and must not occur.

Winning times, planned from results of the last event there, were reasonable considering the spread of ages on so few courses but minor adjustments to the published course lengths had to be made to conform to OY requirements.

Thanks are due to many people. First and foremost are setter Ken Brownlie, controller Anthea Feaver, and organiser Helen Post. Jack Dowling reduced the setters original 25 MB course PDFs to manageable sizes and to Carol Brownlie for laboured with numerous map updates. Helen Post organised almost everything else including the kind people who helped carry gear to and from the car park. Controls were collected by Brian Austin and the Brownlie family; Carol, Vicky, Tom, Archie and Fraser.

Results are on Eventor, and routes on Livelox. [Due to a technical issue, you will need to upload your route manually via the link in Eventor (little red curved arrow next to the blue results button on the calendar line)].
Photos from the event are on Facebook.