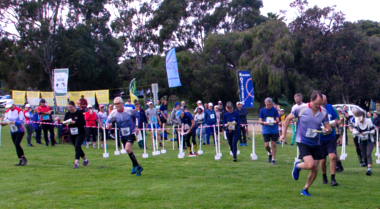 The 2022 Relay Championships featured sunshine, sprint style courses designed by Noel Schoknecht to give route choice options, and easy to find control features within the river parklands of Mosman Park. The event was well attended and participants perched on the grassed arena overlooking the terrain enjoyed the sometimes anxious wait for teammates.

Those paying attention were able to see their teammates racing past as they completed the early western half of their course. The event went smoothly with most teams finishing within 90 minutes of starting. Several local families were attracted to the assembly area from the nearby playgrounds to give it a try once the main competition was well under way. Set up and pack up went smoothly with LOST's army of experienced volunteers.

Running a relay event involves a lot of work, so thanks are due to a very large number of people, especially Noel Schoknecht for re-mapping of the area and course design, Karen Staudte for assisting with course setting and execution on the day, and Moreen Cox for her thorough organisation. Those who helped on the day with putting out controls, setting up the event and afterwards collecting controls and packing up all the equipment included Richard Matthews and Nicole Davis (who also took photos), Ian and Jan Fletcher, Peter Gillon (caravan tower), Anna Napier, Helen Bailey, Peter Standen, Anthea Feaver, Rosemary Kullman, the Lommers family, Simon Spagnol, Blake Merritt, Robert Graieg, Gary Aitken, Edward Plummer, Duncan Sullivan, Tony Simpkins, Jennifer Binns, Andre Morkel and David Messenger. Thank you also to Melinda Richards, Rosalie McCauley and Jack Dowling for IT and admin support. Apologies to anyone we missed.