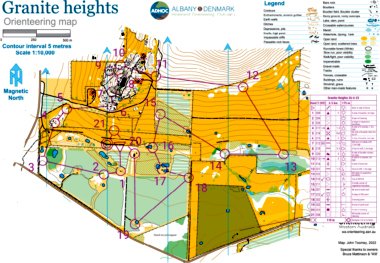 Sunshine and blue skies surprisingly appeared for the Granite Heights event in Albany on Sunday 26th June. This partially completed map was mostly cattle paddocks but with some low-lying blue gums and marshy native vegetation plus some small granite outcrops which made it a perfect area for a local club full of beginner orienteers. Even on the Hard courses competitors were never far from great big features.

Competitors from Perth were Rob and Lois West plus Tony Simpkins, but not Jennifer, who was minding the Jojo, the dog. Jen Graham-Taylor was victorious on the 6.6km (straight line) H2 course by virtue of Tony Whittaker being somewhat inventive in the first half of the course and then not quite being able to make up the 9 minute gap, finishing only 70 seconds down. New members Karina and Ross Wolfe lined up bragging rights over their son Rory, by beating him without running a step on the Moderate course.  They were also a great second behind Edmund Toomey. Tony Simpkins took out first on the H4 course despite not taking a compass with him, or any of his normal orienteering gear which was having a stay-at-home in Perth.

A big thank goes you to Tony, Lyn, Rhett and Tracy who assisted with control collection: this shortened what has been a rather big orienteering-focused weekend for the ADHOC Convenor and setter John Toomey.

A big thank you also to John for organising the event!

Results are now available in Eventor.
Competitor routes can be seen in Livelox.
Photos are on the ADHOC Facebook page.