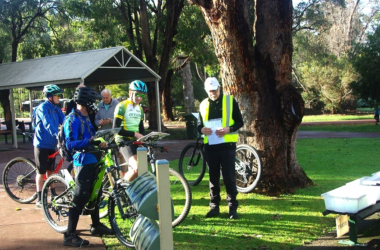 35 participants ventured out into the Glen Forrest to Mahogany Creek Heritage Trail and bush reserves in a very wintery morning, with occasional showers of rain. This was a Maprun6 event using three courses with lengths from 8 to 28 kms.

Participants received an A3 paper map and a code to start the event on their smart phone. The map with their course also showed up on their phone. Once they passed the start flag their time commenced and they were on the course!

Four participants who successfully finished had used their smart watches in place of a smart phone. This is very useful for anyone running instead of riding the course. See information on how to do this on your Garmin watch.

There were the usual issues with gaining a signal and a ping at some control sites and some participants believed that the rain affected their GPS reception, making it harder to ping at the control site. Many thanks to Jack for setting up the MapRun6 before the event and the huge task of correcting the results after the event finished.

Thanks to Rob West for setting the event, and Duncan for the Heritage Trail map. Thanks also to Simon for collecting the gear from the OWA shed and putting out the signage on the day, Lois for assisting on the day and cooking some yummy sausages for the wet and hungry finishers, Helen for advertising and Sue for taking photos.