The WA Classic for 2022 took place over two days on the Hill Park Dale map near Beverley. The hilly farmland map includes lots of rock detail as well as some open land, and provided opportunities for spotting kangaroos and newborn lambs.

Ninety four competitors turned up on the cool but dry Sunday afternoon, including 6 newcomers from a local farming family. Many people found the middle distance courses challenging, but the winning times were close to targets and generally the courses were well received with almost all starters completing their courses. 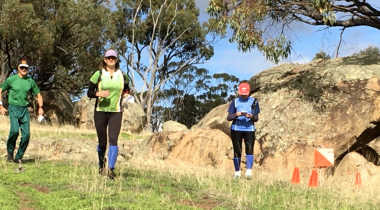 Around twenty families camped on the farm in a lovely flattish paddock close to the starts and finishes, surrounded by sheep and little lambs. They enjoyed a huge bonfire until a late shower drove them into their tents and caravans, to rest and prepare for the competition in the morning.

Day 1 results are in Eventor.
Upload your track to Livelox and compare your route choices with those of your fellow competitors.
Photos are on the OWA Facebook page.

A somewhat grey and chilly morning saw seventy six competitors head up the hills for a second time to face the multitudinous rocks and some very steep and tricky slopes on the western side of the map. Most made it around the courses unscathed apart from a couple of minor problems on the H1 to H3 courses. The setters found it difficult to identify individual rocks to have as control points in some areas, so a lot of cliffs were used as control sites. There were lots of sheep and lambs in the paddocks between the rocky outcrops and steep hill slopes.The weather improved over the course of the morning. Fences were a common theme, as a working farm needs quite a few, but we didn’t hear of any torn pants or bodies! 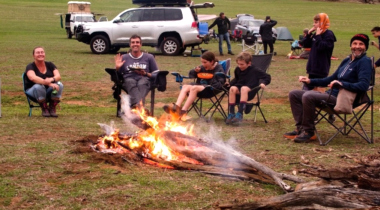 Day 2 results are in Eventor.
Upload your track to Livelox and compare your route choices with those of your fellow competitors.
Photos are on the OWA Facebook page.

Thanks are due to many people, including Tracy, Paul and Josie Burns; Jan and Ian Fletcher; Mike Howe; Moreen Cox; Rosalie McCauley; Richard Matthews; Ellie Sansom; Anthea Feaver; Peter Standen; Mark Lommers; Simon Windsor; Vanessa Smith; Robert Graieg; Nick and Zali Dale; Tim and Melaleuca Sharp; John Toomey; Graham Braid; Liisa Hirvonen; Peter Gillon; Anna Napier; Rosemary Kullmann; Jennifer Binns; Tony Simpkins; Andrea Eves; and everyone who collected the wood for the massive fire on Sunday night and then cleaned up the site the next morning. Special thanks go the setters, Liisa Hirvonen (Day 1), Peter Gillon and Anna Napier (Day 2), and mentor Richard Matthews, and to the organiser of the event, Helen Bailey. Thank you also to the farmers who allowed us the use of their property.

Combined Day 1 and Day 2 results are in Eventor.