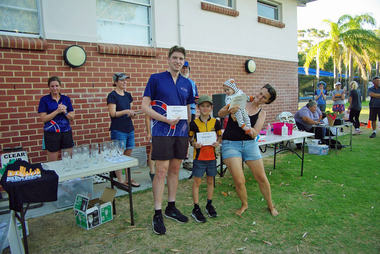 The Dalkeith MetrO Series event was set by fifteen-year-old Liam Dufty. He added his own novel twist to the event with his favourite part of orienteering, a finish sprint. Control 130 which was very close to the finish was put out 5 mins after competitors were underway making it the logical choice for everyone’s last control. A leader board of finish splits was kept and updates were added as new best times came in. Prizes were awarded to the fastest splits on each of the courses with Sten Claessens the fastest on the long (and overall) in 13 seconds. Tracey Foster and Christopher Drury tied with 15 seconds on the medium. Amy Dufty and Robert Graieg also tied with 14 seconds on the short.

As this event was also the last of the 2021-22 Metro Series overall series presentations were held at the conclusion of the event to recognise the place-getters' good results. Thanks to Ceri Pass and Melinda Richards for organising prizes.

Thank you to helpers who made the Dalkeith event happen, starting with Liam Dufty for his work setting the courses assisted by his parents Craig Dufty and Rachel West. Thanks to the many control collectors Annemarie and Toni Frank, Mike and Nicole Sibbald, Rob and Lois West, Penny Dufty, Ellie Sansom, Rob Beattie, and Jack and Sue Dowling. Thanks also to Melinda Richards and Rosalie McCauley for once again providing the IT support for the event. Thanks to Jack and Sue Dowling for doing meet and greet and Rachel West for doing the newcomer briefing. Thanks to Rob Beattie for his help with event set up.

Check out the MetrO Standings here to see how you fared in the MetrO season and who were the overall place-getters in your class.

Results for this event can be found here.Upload your route to Livelox and see what routes your fellow orienteers chose.Check out the MetrO Route Analysis for this event.