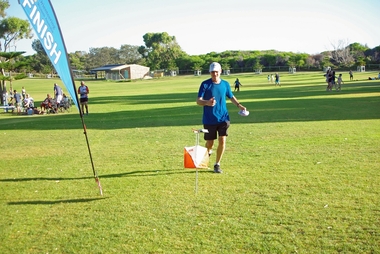 The sea breeze didn't disappoint and 79 people enjoyed cool conditions for the second last event in our MetrO series. There was a bit of up and down which, if you were careful, you could avoid. Away from the coast there were treed parks and fountains to be discovered. It was fun!

Familiar names appear in the results. On the short course, Liam Dufty was the fastest male and Matilda Black fastest female. On the medium course Paul Dowling and Caroline Bertolino took the honours and on the long course Sten Claessens and Ceri Pass prevailed. Well done to all those who came and ran.

Check out the MetrO Standings here to see how you fare in the overall scores.Melinda has also produced a table that shows results by gender and course, that is, male: short, medium and long, with the same categories for females. Find it here.

Thanks are due to the many people who helped. Melinda Richards and Rosalie McCauley again handled the IT tasks and WOW volunteers helped collect controls. They were Chip Lundstrom, Ken Post, Carol Brownlie, Helen Post, Carolyn Read with sons Christopher and Jonathon, Chris Howitt and Tom Brownlie. Helen Post was part of the meet and greet team and introduced orienteering to newcomers at  the newcomers briefing.

A big thank you to Andries Swart who set the interesting courses and helped with the set up and pack up.