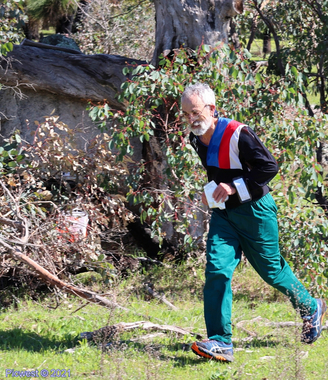 A beautiful warm and sunny day welcomed orienteers to the Middle Distance Championships.

There had been a lot of rain recently and many of the watercourses were flowing. On the Thursday before the event, the southern road was a flowing stream and a dry ditch had become a 3 m wide torrent, so some last minute changes had to be made to the Easy and Very Easy courses. The terrain was varied with some fast open forest, slower patches of mature grass trees and complex rock detail on the steeper hillsides. Being a middle distance event, there were many short legs and direction changes, which provided plenty of technical challenge.

There were 87 entrants in the Championship event and another 23 enter-on-the-day competitors. A big thank-you goes to Rosalie McCauley who co-ordinated and ran a Guided M course for a group of enthusiastic participants from the Jaunt at John Forrest event.

Craig Dufty was a clear winner in M21A, while there was a close tussle between Rachel West and Ceri Pass in W21A, with Rachel the eventual winner by 41 seconds. Mason Eves had an outstanding run in M17-20, with a time of 39.52, which would have placed him second in the M21A class. Amy Dufty excelled in W14, with a winning time of 30.48.

Many thanks to all the LOST gang and supporters who helped out. Peter Gillon and Eddie Plummer did the towing and Liisa Hirvonen the instructing. Control collectors were Tony Simpkins, Richard Matthews, Liisa Hirvonen, the Madden/Tarr family, Bob Boekelaar, Hadrien Devillepoix and Peter Standen.

Full results are in Eventor. Watch out for photos on the OWA Facebook page.