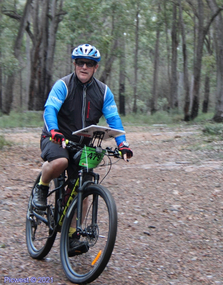 Apart from a few very short and light showers conditions were ideal, cool with minimal wind, good surfaces with just a few puddles. To prevent Dieback disease spread participants bike wheels were scrubbed and sprayed at the pre-start.

The original 1982 foot orienteering map of Lake Leschenaultia had just been extended and converted for MTBO by Duncan Sullivan to an unusually large scale so as to accommodate the more recent network of dedicated one-way mountain bike trails in the north.
Courses were skillfully set by Simon Windsor to provide a mixture of fast riding on wide tracks, energetic slopes and testing rocky single file paths with extra man-made obstacles. The shortest course was mercifully benign, considering that the largest class, after M21, was M70.

Rather sadly six of the ten championship classes entered had only one participant each. Thirteen riders chose to be non-competitive, including one on an e-bike and one on foot.

Two people unknowingly exchanged maps at the start, so that one rode 26 km in stead of the 8 he expected.
Presentations were closely watched by several ring-neck parrots who must have been disappointed the formalities were completed any before lunch time food appeared.

The Reflections Café at Lake Leschenaultia did lots of business thanks to the influx of orienteers desperate for coffee and other goodies.

Thanks are due to many people. First of all, a big thank you goes to Simon Windsor for setting the event. Duncan Sullivan updated the map. Debbie McKay and Richard Begley, Rob and Lois West, Hadrien Devillepoix, Dave Symons (who went out then had to return because the organisers had forgotten to give him a key), Rob Beattie and Tim Sharp collected controls. Rob West and Sue Dowling took photos.

McTeam duties were handled efficiently by Ellie Sansom and Jack Dowling. Jen Porter assisted with packing up. Jack and Sue Dowling assisted with organising, setting up, and then packing up.

Results are in Eventor. Look out for photos on the OWA Facebook page.