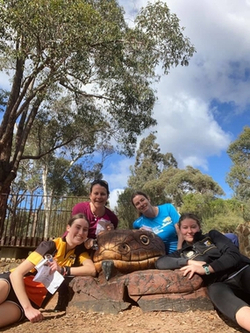 The mapped area of John Forrest National Park covers a steep and bushy valley. As the park is also close to Perth an event at here is an ideal opportunity to introduce orienteering to newcomers. The Setters aimed to have beginner-friendly courses on the VE, E, M and H4 that avoided as much of the bush and climb as possible. The event was promoted via Facebook and Eventor as a beginner-friendly event and this extra promotion resulted in a big turn out of beginners.

Thirty four people pre-entered via Eventor and an extra 103 people entered on the day, the majority of whom were new to orienteering and were made very welcome. Feedback showed that most participants enjoyed their courses. Analysis of the splits showed that control 117 on the M and H4 and H3 was the difficult control for the day.  Well done to everyone who found this control on a minor watercourse in thickish bush without problems and well done to all who persevered to find it after having problems.

Jaunt at John Forrest was originally to be held on 4 July 2021. The COVID-19 lockdown meant this could not happen and so OWA Council decided the event should be run on 25 July 2021, which luckily was a beautiful day. This change meant more work for all involved in organising the event including Department of Biodiversity Conservation and Attractions staff.
The recent rain meant Hovea Falls changed from a couple of dry rocks to a RAGING TORRENT and a taped detour allowed them to safely cross the Jane Brook and admire the Hovea Falls on the way.

The big and welcome influx of beginners meant the Instructors (Daisy and Ann), the computer operator (Melinda) and the Starters (Rosalie and Christine) were kept very busy explaining all about orienteering to the newcomers. This was a great experience and a good reminder to all of us about how complicated orienteering looks to those who have not done it before. Thanks to Brian, the Controller who quickly swapped two controls to their correct locations after time pressure meant they were misplaced.

A big thank you to the WOW members who helped on the day – David, Ann, Melinda, Tracey, Dan, Peter and Jenny – we could not have done it without you.
Also many thanks to Setters, Organiser and Controller, namely Daisy, Christine, Rosalie and Brian.

To add another challenge for the  participants we ran a best selfie competition. We asked everyone to take a selfie with the giant yorna. The winner will take home – when we catch up with them – a giant pumpkin that was displayed near the caravan. The intrepid foursome of Zali, Ellie, Jen and Sarah posted an amazing selfie on #orienteeringwa. Also see above. The photo is special because Ellie and Jen were mid-course. Well done! Each of you can look forward to using up your one quarter of the giant pumpkin.