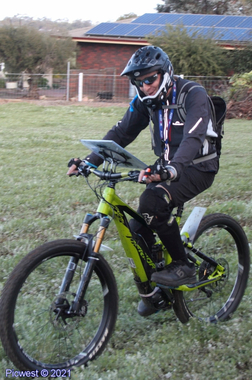 We were lucky with the weather for this, the fourth MTBO event for 2021 - there were only a few showers to deal with. Twenty six MTBO-ers came to Narrogin, most of them from Perth and a few from Dunsborough. The irrepressible trails enthusiast Michael Chin (the driving force behind Wheatbelt Cycling Collective) turned up and immediately entered his first MTBO course. We had several other newbies too.

Jack Dowling set some interesting courses through the intricate and rocky terrain. The courses proved shorter than planned, but the small map and the many one-way tracks added enough  complexity to keep everybody busy.
Local photographer Richard Whyte turned up, having heard about the event from Michael Chin. He captured orienteers on bikes plus the resident horses, Foxes Lair bushland, and more on his camera.

Many thanks go to those who assisted. Lois and Rob West instructed and also collected controls and all the signs. Ellie Sansom instructed and handled IT duties. Controls were collected by Debbie McKay and Richard Begley, Hadrian Devillepoix, Ian Dalton  and Sue Dowling (who also put out controls).

Thanks also to Greg and Eileen Scott for allowing us the use of their property as the assembly area, especially as it involved everyone driving through their front yard - the usual assembly area was too waterlogged.
Last but not least, thanks to Jack Dowling who organised the event and the whole Tour.
Results are in Eventor.

Stage 2: Dinner at the Duke of York Hotel
A great way to finish an action-packed day was to have dinner at this local hotel. The food was delicious and only Richard Begley could fit in dessert.

Stage 3 (Sunday): The Yorny Trail at Yornaning Dam
This trail is a work in progress and it's the brainchild of Michael Chin. Those of us who made it there enjoyed a reasonably easy ride (or walk, for Lois and Sue) through the open bush.

Stage 4: MaprunF at Dryandra
A select group of orienteers made it to Dryandra for one last ride.

And then it was time to head home or off to other destinations.