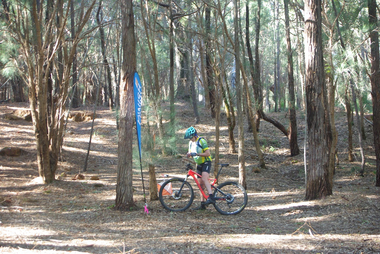 It was a fine but cool day for the MTBO at Langford Park near Jarrahdale for about 30 bike riders. Rain threatened from time to time, but the sun came out and the bush looked lovely.

The standard 3-level event attracted some very experienced MTBOers as well as newcomers but was not an easy ride for some! The multiple tracks winding through the bush and Alcoa revegetation areas were reportedly tricky but generally enjoyable due to pleasant terrain.

The event was overseen by Duncan Sullivan but set and run but some very inexperienced MTBO orienteers (Phil Taylor, Andre Morkel as setters and Anna Napier as organiser) who stepped up to fill the gap! However, we all learnt a bit more about it as we went along.

Many thanks to regular helpers who got us through :
Jack and Sue Dowling (on IT duties and control collection); Ellie Sansom (relief IT, beginner coaching); Jen Porter (general assistance); Duncan Sullivan for re-mapping the area and clearing tracks; control collectors: Rob Beattie, Graham Smith, Richard Begley.