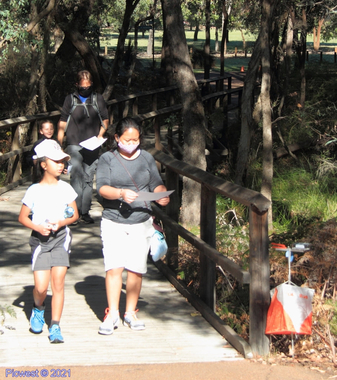 Just over 100 people enjoyed the pleasant autumn weather for the event at Whiteman Park last Sunday.  There were many who were newcomers to orienteering and it was good to see a number of students from St Brigid's School attending as practice for the June Schools Orienteering Championships.

Well defined boundaries on the E and VE courses kept younger participants on course, while on the longer courses route choice was affected by the many fences that were topped with two strands of barbed wire!  These deviations extended the running distance, but it was lovely to run fast in the open areas.

On the H1, Sten Claessens (1st), Craig Dufty (2nd) and Hadrien Devillepoix (3rd) had their usual tussle for placings.
Ceri Pass had a great run, winning the H2. Mike Sibbald marked his come-back with a win on the H3. WOW members took 3 of the first 4 placings on the H4. After coming 1st and 2nd on the E course, Archie Brownlie and Rohan Braid teamed up to be the fastest on the M course, but with prior knowledge. Tristan Blake blitzed round the VE in just 31 minutes.

Thank you to all the helpers who instructed, collected and set out controls: Ceri Pass, Rohan Braid, John and Jenny Major, Sten Claessens, and Heike Behrbohm. Rosalie McCauley, Melinda Richards and Jack Dowling operated the computer for us. Thank you to Vanessa Smith and Robert Graieg (honorary KO member for the week) who designed the courses and set out controls.