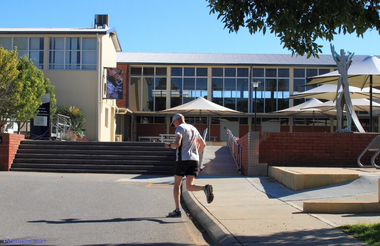 WA’s first multi-level Sprint was a mixed success, with opinions of experienced orienteers ranging from “too hard to be enjoyable” to “the best sprint I’ve ever done.”

On the positive side, most people nevertheless seemed to ‘enjoy’ the experience. The artificial barrier in the west quadrangle caused a few grumbles but the grumblers conceded that it did add considerably to route choice options. Everyone agreed that it was very challenging both mentally, with the tremendous amount of route choice throughout, and physically, with all those #$%* stairs.

The large majority of the negative aspects can be attributed to my inexperience as a setter; these included:
a) The course was too complex for a single page; I should have put in a map exchange.

b) The courses were too long. I had estimated them to be 3 km and 2 km (given the alleged line distances of only 1.4 km and 1.1 km) but I now think that I might have made a mistake with the map scale in PurplePen, such that the shortest courses were likely closer to 4 km and 3 km.

c) 3 controls were poorly placed; the only legal way to get to them was by long out & backs, but much faster access was possible by illegally crossing impassable fences. These 3 controls were all late in the course when people were physically & mentally tired, and some, including at least one very experienced orienteer, found the temptation of the short-cut too great.

e) One gate which should have been open (in the far NE) remained locked for the first runners. At least 2 runners (Sten & Robert) were blocked by this gate before I realized and unlocked it, adding the best part of a minute to their times. I apologize to anyone blocked by this gate. My weak defense is that after unlocking the other 23 gates & doors and putting out all the controls & bricks my mind and body were starting to suffer from the same punishment that I was deliberately inflicting on everyone else.