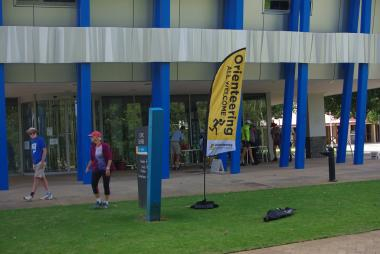 A windy but fine morning saw 65 people competing at the first NavDash of the year, starting in the pleasant grounds of the Gosnells Civic Centre and moving out to the riverside bushland of Centennial Pioneer Park and briefly into the Gosnells shopping area.

The nature of the area and the short time-frame available for planning meant there was limited scope for map updates and subtlety in course planning. In any case, the map offers few opportunities for detailed navigation challenges and intricate control sites so the Hard courses focused on providing multiple route choices. There was only one leg where a hasty route choice could cause a major time loss.

Unmapped trees may have caused confusion at control 1 on Short H.

The Start layout was a conventional sequence, though much more compact than usual. Having the Start marker (‘triangle’) visible was an initial planning oversight. One reason for retaining it was to help newcomers see the sequence. Unfortunately, there were almost no newcomers, possibly because of the long weekend. Many people seemed confused by the layout, and there was a surprisingly large number who had not availed themselves of the information provided on Eventor and at the top of their control descriptions.

Judging from the results list, most people had fairly clean runs but the splits show some hiccups, and a few people apparently pushed too hard and made serious errors, including some bypassed controls.

Ian Fletcher was planner/setter, with vetting and field assistance from Chas Lane and Mike Howe. Moreen Cox was our very efficient organiser who made many phone calls to ensure that the toilets were open, and then tracked down a security guard to actually open them.  Jan Fletcher and Mike Howe provided instruction for newcomers, Melinda Richards kept the computer under control, and Gary Aitkin, Helen Bailey, Jen Porter, Nick Dale, Eddie Plummer and Robert Graieg collected controls.

Results are available on Eventor here.