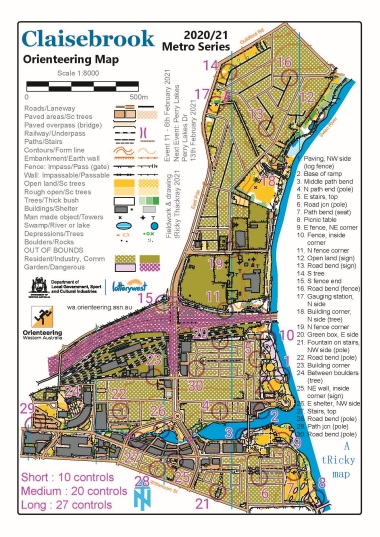 tRicky had been preparing for the Claisebrook event for quite some time, being a new and very complex map (for a Metro event) there were a lot of decisions to make about CP locations, probable pedestrian traffic and a number of busy roads through the map causing OOB headaches.  As it turned out there were more important issues to deal with such as a possible cricket final on the same night (avoided), then the lockdown (ended the day prior) and finally the remnants of a tropical cyclone passing through on event day.

The aim of this event was to set a compact course that allowed as much route choice as possible between controls more so than deciding which ones to collect (though the order was still a factor) but with a lot of detail to take in with the many paths through OOB areas near the start, parkland and waterways to negotiate.  The long course headed into 'easier' detail in the north but again with macro route choice between almost every control.

Thankfully the weather didn't deter the 70+ participants at the event but it did keep the casual pedestrians away so a bonus.  The rain was minimal and kept it cool (something that hasn't happened a whole lot at earlier season events) and participants seemed happy with the tRicky courses set, which will most likely be his final MetrO event before relocating to Melbourne where the weather is much more predictable.

Thanks must go as always to the many helpers:

-Rob and "Nat" for pre-event setup

-Rosalie and Melinda for computer

-Emma for collecting the maps, which were located outside my radius!

-Tash, Sarah, Zali, Deavi and friend for pre-bagging the maps (Sarah also did the novice briefing)

-tRicky for his Darth Vader impressions!

Check and compare your results here