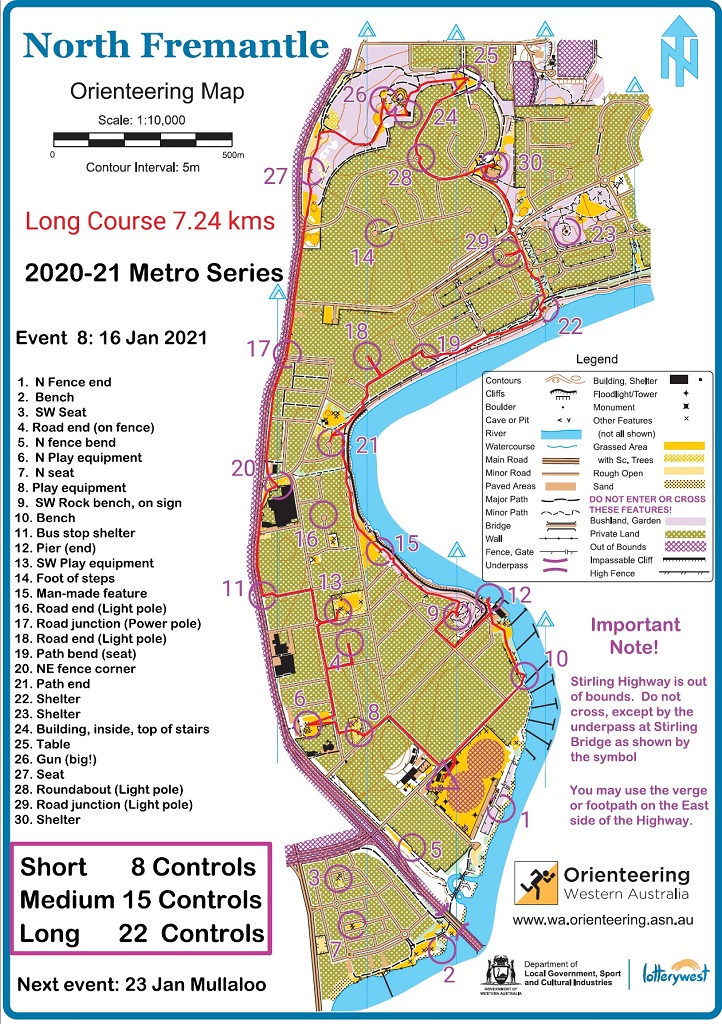 A fun but challenging time was had by all in the heat of North Freo on Saturday. The course setter (Noel Schoknecht) sat out this event at home – in isolation, after returning from Christmas and New Year with his Mum in Melbourne, so it was left to Simmo and others to do the hard yards!

On a very linear map, Noel set an interesting course which included favourite spots around the riverside suburb. These included the beach (Nos. 1, 2, 10 and 12 – no sharks sighted), a steep climb into the bush above the river at 9, Noel’s wedding location (No. 22), Mt Lyell lookout (23), Dingo Flour Mill (20), Matilda Bay Brewery (17), and the World War II guns at Buckland Hill (24 and 26). A popular route ran between 4 and 8 past the Schoknecht quarantine house, where Noel sledged runners from his veranda above the street.

From the Start, in front of the Grandstand at Gilbert Fraser Reserve (special thanks to Armando and the Fremantle Mosman Park Cricket Club for letting us use the Grandstand), competitors had to circumnavigate two cricket matches on adjoining pitches before making their way out of the Reserve. For the Short course, a big No-No was heading SW under Stirling Highway, which involved an extra 500m. However, this meant that the shortest routes involved some steep climbing.

Effectively, the Medium course was a case of choosing 15 from 20, since the 10 most Northerly controls were not a practical choice, and several route choices were more or less equal.

For the Long course the best routes involved going all the way North to the Big Guns, and carefully picking a variety of controls to leave out. Hopefully this kept the competitors on their toes.

Duncan Sullivan managed another win on the Short course, despite being hamstrung on the downhills, and coming in 3rd place to find that two faster competitors both defaulted. Tiffany Watson, at her first event, missed both the Novice and main briefing and was blissfully unaware that crossing Stirling Highway was verboten. Honest LOST Richard ‘fessed up to having crossed an OOB bush area and DQ’d himself. This left Penny Dufty, and Dave Pass to fill out the placings, with Debbie McKay and Wendy Hobley 2nd and 3rd Women, and Gary Aitken 3rd man.

In the absence of his younger and faster rivals (all guests of ADHOC this weekend), Ron Marcus took out the Medium, pressed all the way by Robert Graieg, with Chip Lundstrom 3rd. Newcomer Bree Trewin was fastest woman, followed by members of the Primrose family and Georgie Russell.

There was a smaller than usual field, with up to 30 regulars away in Albany, but with Simon Windsor and Georgie Russell both bringing friends along, the number of newcomers received a boost.

Thanks to the BO Club for helping to set up, to meet’n’greet, and to collect controls, and to Rosalie McCauley and Melinda Richards for IT support. Simon Windsor and Jack Dowling did the Meet and Greet, and Ricky Thackray, Sue & Jack Dowling, Hadrien Devillepoix, Penny Dufty, Simon Windsor and Luan Swart collected controls. Rob Beattie helped with the pack-up, and Ellie Sansom helped at the novice briefing, as well as control collecting.

Check and compare your results here !