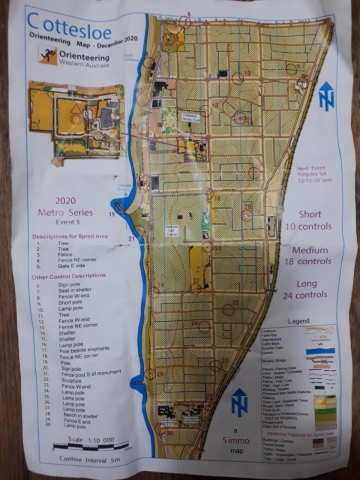 Cottesloe proved to be a superb setting for this week’s Metro event with controls within the main suburb and in various nooks and crannies as well as along the beach front. One control on the groyne ended up being wave drenched due to the brisk wind giving runners a complimentary shower to avoid overheating!

The event commenced at the Civic Centre where an additional mini-sprint map added to the complexity of route planning.

The two controls at the end of sand paths onto the beach aimed at nudging runners into considering a beach run weren’t entirely popular and sensibly slower beach running seemed to be have been generally avoided. It was wonderful to see many newcomers for the run.

First runner in for the day was Duncan Sullivan, with in the male category Ken Brownlie storming in a little while later to be second closely followed by Rohan Braid. Jo Addy’s group came first in the female category then Susan Coleman and Amy Dufty.

Liam Dufty cruised in to victory for the medium distance still looking pretty fresh with Nick Dale and Matthew Seward returning for the subsequent places. Daisy McCauley’s running training has been paying off with her convincingly winning the female medium event with Zali Dale and Kate Braid returning second and third.

Ricky Thackray, as often is the case in his second competitive event of the day, thundered in to first place in the Long event of 24 controls, with Craig Dufty hot on his heals then Jason Simpson coming in third in the males. Ceri Pass was first in the female division with Rachel West a few second later and Jennifer Porter third.

Thank you very much to Sophie and Hunter Giles and Veronica Jarrett for helping set up the event and putting out controls and giving the newcomers’ briefing thus giving up their runs. Thank you to LOST for assisting running the event including Tony Simpkins and Maureen Cox and as always orienteering was in the debt of Rosalie McCauley for her IT wizardry and time and effort. Many folks kindly volunteered to collect controls including Zali and Nick Dale, Jason Simpson, Rosemary Kullman, Helen Bailey and Sophie and Hunter Gilles and Carol and Ian doing an impressively rapid control sweep.

Check and compare your results here!  A more in depth analysis is found here>>