Almost 100 people, including a pleasing number of juniors amongst the first-timers and recent beginners, took part in the Herdsman Lake event in dry, cool conditions. The assembly area was the Herdsman Lake Discovery Centre, which provided coffee as well as pleasant surroundings. Feedback after the event was very positive (despite some frustrations with downloading SI data for people who entered at the event) with many commenting on the pleasant lakeside portions of the courses.

Eighty-two people attended the event at Sorrento on a blustery and cool day. The start was in a shady, grassy depression which meant an uphill start for everyone. 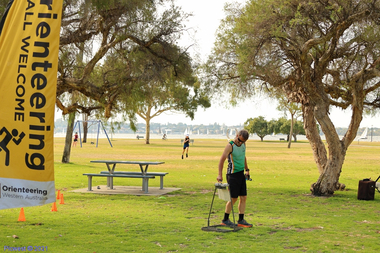 After a number of events held in hot conditions, Event 6 of the MetrO series in Applecross enjoyed cooler weather. About 100 participants took on the courses that featured the picturesque river foreshore and jacaranda-lined streets. It was especially great to see a large number of newcomers giving orienteering a go, including many juniors.

There were some tight finishes between several runners. Rohan Braid put in a massive final sprint to deny Duncan Sullivan top spot on the short course, with Ruby Phillips and her friend not far behind. The father-daughter pair of Nick and Zali Dale dominated the medium course, while the long course was won by newcomer Mitchell Crook and Sophie Giles.