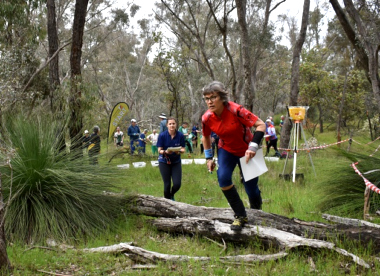 Over 100 competitors made it out to the WA Long Distance Championships at Malmalling East. Apart from those misled by signs that were turned around by ‘pranksters’ on motor bikes, most competitors reached the start on time. The terrain was less rough and rocky than experienced in recent events and winning times indicated that the courses were age appropriate, although the range of times suggested that they still provided quite a few people with challenges.

We kept our promise to the Water Authority and no one drove or walked through running water. Ian’s bridge over the Helena River tributary enabled everyone, and their baggage, to get safely from the Parking area to the pleasantly shaded Assembly area, the start and the finish chute which abutted the assembly area - thus allowing spectators to cheer in their family and friends.

A big thank you to the organising team: Ian Fletcher, setter; Tony Simpkins, controller; Jan Fletcher, organiser; and Melinda Richards, IT. Thanks also to the many other people who made the event a success. Peter Gillon towed the caravan and John Taylor, the toilet – two of the least popular jobs. Jennifer Binns kindly helped Ian run the start. Helen Bailey came early to put out the VE and E controls and help the other early arrivers to set up the Assembly area and carry equipment to the start. Riley McFarlane assisted at the start by retrieving the clear and check stand. Sue Greig ensured the safety of the courses for novice orienteers by doing a sweep of the creek section of the course. Collecting controls and helping pack up equipment was efficiently done with the help of Mike Howe, Liisa Hirvonen, Nick Dale, Anthea Feaver, Robert Graieg, Edward Plummer, Helen Bailey, Caitlin and Isaac Madden, Rosemary Kullman, Umdevi Ayanari, Sandra Tarr and (still helping) Jennifer Binns. There were doubtless others who quietly helped and have not been named - thank you all! 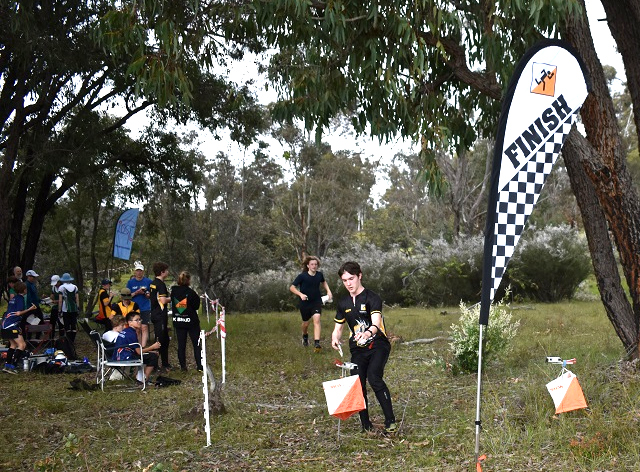 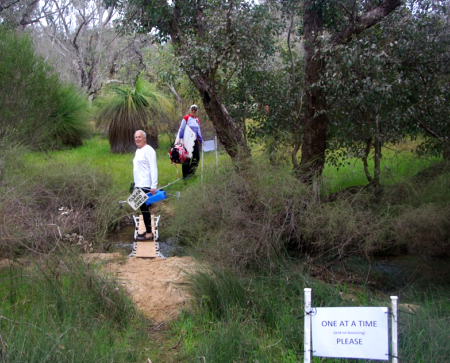 Photos (by Pam & Sue): Starters at Malmalling E; spectators cheering the finishers; the bridge in use.