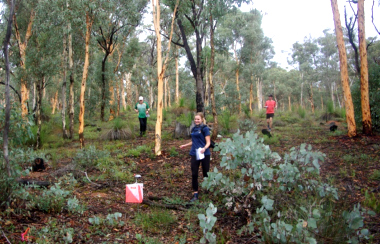 East of The Lakes

The Calophylla Long State Series event had an attendance of 78 brave souls who made it past the puddles and eroded tracks to arrive at the assembly area. The terrain was quite tough with deep gullies and watercourses to cross to the east of the map and prickly bushes between the rock surfaces to the west.

Much to our surprise on the morning of the event the toilet tower and the computer operator arrived from the opposite direction to what we had expected. The toilet tower, who shall not be named (yet), took an even more adventurous route to the assembly area, through even bigger puddles, with the computer operator trustfully following the toilet. Unsurprisingly the toilet paper inside this toilet by the time it arrived at the event was sodden and had to be saved by a few rolls from the supply of extras stored in the caravan.

Unfortunately we had an incident where a competitor needed assistance. Many people interrupted their runs to provide assistance and the names of everyone involved were not recorded - if you are not named, please know that we very much appreciate your effort to help. We would like to thank Riley and Sharon McFarlane, Marcel Abrams and Julia Hilke, Laura Gunning and Katie Schutze, Rob West, Ken Brownlie and Matt Seward very much for their help.

Results are on Eventor, and routes on Livelox.
Photos from the event are on Facebook.