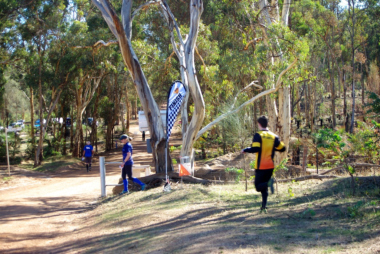 A number of families as well as a two week old baby were included in the 103 participants who enjoyed the sunshine at Yetar Spring on Mothers’ Day.

Although the trail-bike rider tracks had been updated in the northwest of the map, numerous unmapped tracks elsewhere may have caused confusion for some. Those who went to the most north-easterly part of the map were recognisable by their blackened appearance having traversed an area that had been burnt a year or so ago.

The courses were challenging and resulted in generally longer times than expected. The Moderate course was clearly set rather too navigationally difficult meaning there were a number of mispunches and DNF’s.

Many thanks to the willing WOWers who collected controls and helped with set-up and pack-up. These include: Rosalie, Dave and Daisy McCauley, Chris Howitt, Robert Boekelaar, Vicky, Tom, Archie and Fraser Brownlie, Ken and Helen Post, Jenny Komyshan and Moreen Cox (LOST). Dan Greig also collected controls after manning the main start. Melinda Richards was again the face behind the computer. The Brownlies did the towing, Tom towed the caravan and Ken the toilet.

Thanks also go to setter Dan Greig and Carol Brownlie. Ken Brownlie supported the setters by helping with remapping the tracks and putting out some remote controls that he wouldn’t visit when he competed on the H5.

Results are available on Eventor, and routes on LiveLox.
More photos on Facebook.