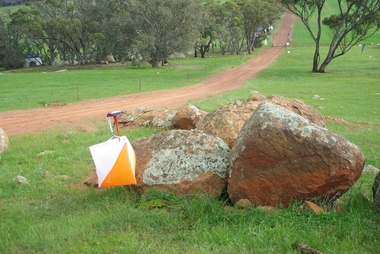 Despite an early forecast of light drizzle, there was a total of 81 competitors on Day 1. On arrival, they were greeted by a change in the weather to windy and rainy for the duration of the event with fine weather returning after the last competitor finished. People camping had a chilly night despite a huge bonfire kindly provided by landowner Russel Thomson.

Courses were set by Peter O’Loughlin who unfortunately was unable to be present on the weekend due to a medical issue. From positive feedback received from competitors, everyone enjoyed the courses although some claimed they were led astray by magnetic abnormalities in areas of the map.

Thanks to Jack and Sue Dowling for towing the caravan, Liisa Hirvonen for her invaluable help with set up and the tireless task of putting maps into map bags, and Eckhart Bosman as the starter. Control collection was assisted by Marlize, Jaco and Aldo Bosman, Liisa, Tony and Lyn Whittaker, Cliff Phillips, and Jack and Sue. With their help, all controls were collected or moved to new locations by 4.30pm.

A lovely clear morning dawned with landowner Russel and his front end loader shuffling wood at the bonfire – coals were still hot and took the edge off the chill. There was a total of 78 competitors for Day 2. Courses were set by John Toomey and feedback indicated that competitors enjoyed the courses, a number of runners going out for a second.

Everyone had returned by midday which enabled presentation of course winners to take place not long after. Landowners Russel and Margaret with daughter Bindi attended the presentations and received thank you gifts, along with gifts for Lola and Frank Carter who were unfortunately unable to attend. Farmer Russel commented that it was great to have everyone enjoying the farm land and seeing everyone having a great time and being active. He looks forward to welcoming us again.

Thanks to control collectors Tony, Cliff, Hadrien and Ellie, Sue and Jack, and Nick Dale. We are also grateful for the help from Ken and Carol Brownlie, Helen and Ken Post and Maureen Cox. Thanks also to Peter Gillon and Anna Napier for assisting with pack up and kindly towing the caravan back to Perth.

Special thanks to Robyn and Cliff Phillips for their invaluable assistance over both days.